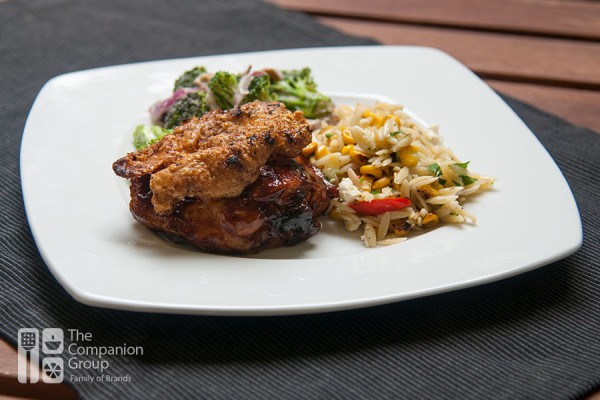 If there’s one meat that has endless possibilities on the grill, it’s chicken. Whether it’s cooked sitting on a beer can, slathered in BBQ sauce, or skewered on a rotisserie, chicken on the grill certainly is delicious. In my opinion, the best thing about grilled chicken is a nice, crispy skin bursting with flavor. In today’s post we’ll show you how to get crispy chicken skin. All you’ll need is a fresh piece of chicken (thigh or breast) with the skin on.

Moisture is the Enemy

What can we do to ensure the crispiest skin on our chicken? The first step is to eliminate any extra moisture by allowing the chicken to air dry in the refrigerator for at least 2 hours (but up to 24 hours) before cooking. It’s also a good idea to pat the chicken dry with a few clean paper towels before it goes into the refrigerator to further remove moisture.

After you’ve allowed the chicken to dry, the next step is to start a good sear on the skin. If you’re using a dry rub, go ahead and season your meat now. Try not to over-season the skin because some rub ingredients, like sugar, could cause the skin to burn easily. Preheat your grill as hot as possible, using all burners turned to the highest setting; but before putting the chicken on the grill, turn off any burners directly below where you’ll be placing the chicken – this will minimize flare-ups. Brush each piece of chicken lightly with olive oil and place skin side down over indirect heat. Searing the skin side first will begin to render out some fat from the chicken, which is the first step in crisping skin.

After 3 or 4 minutes, begin flipping your pieces of chicken. You should see browning starting to appear around the edges and across the skin. You’ll also notice the skin has begun to shrink as the fat renders out and it begins to dry out. Continue cooking the chicken as you normally would up until the point where you would regularly add barbecue sauce.

Here’s where we take a little detour in technique. Normally we’d just brush the BBQ sauce on, flip the chicken a few times to caramelize it, and call it a day. Instead, we’re going to carefully remove the skin from the chicken with a pair of grill tongs. Place the skin in front of the meat, directly on the grill, over indirect (or very low) flame on. I can’t stress this enough: the heat must be low or indirect and you should place it on a cooler front portion of your grill grates – otherwise you’ll end up with burnt skin that’s still isn’t crisp.

Just like there are things you can do to make crispy chicken skin, there are also mistakes that can make your chicken skin soggier than a French dip sandwich. Try to avoid the following if you’re looking for crispy skin:

So maybe you’ve had grilled chicken a few hundred times, but now it’s time to try it with the crispiest skin ever. With these tips and tricks, you’ll be able to take grilled chicken to a whole new level!

Daniel does business development and marketing at The Companion Group. When he isn’t writing you can find him rock climbing or doing ceramic artwork.

Tweets by @companiongroup
You are here: Home › Blog › How to Get Crispy Chicken Skin

Who We Are
News & Events
Press Kit

Charcoal Companion
Pizzacraft
Steven Raichlen
Not In My Backyard